Your home and event source

Shout out to our valued and regular shopper, Renee. Congratulations to the Charles A. Milton Arts & Entertainment Center on another successful annual fundraiser unGala and auction that was hosted Saturday November 13th. Basket donations provided by CAMAEC board members. Check out the baskets Renee made with some items purchased from our store! The Melton Center contributes to the quality of life for all people of the greater West Chester community. The center is a non-pro
0 comments

We are shedding the light on Black Friday today through November 30th! We have a deal for you and our doors are open! Take 50% off any one item in the store with any other purchase. We sell items starting at 50 cents! No exclusions! You choose! Just show up and we leave the light on for you until 5pm tonight! 💡 Speaking of light, we have quite a few lamps, candles & candleholders. 🛋 Did I mention cameras? We have a couple cameras and some vintage photos for sale. 📷🖼
0 comments

Hey all you shoppers that didn't make it out for our Black Friday Sale.... We are now offering 50% OFF any one-item-of-choice with a purchase. No price exclusions! Stop out! This is an ongoing offer until the end of November to show our loyal and new customers how grateful we truly are! Free parking! DISHFUNCTIONAL 126 S FRANKLIN STREET WEST CHESTER, PA #uniquegifts #funshopping #preownedtreasures #discountshopping #funthingstodo #consignmentshop #dishfunctional #westcheste
0 comments

Black Friday is here! Dishfunctional is is open from 9:00am until 5:00pm (or a little later) We hope the food was delicious and the company was grand today. Lets walk off some of those calories we gained stuffing our pie holes lol! Shop 'til you drop at our warehouse decorated and stocked from wall-to-wall and ceiling-to-floor with discount tableware, home décor, art, jewelry and a variety of other unique items! EVERYTHING IN THE ENTIRE STORE IS 40% OFF! This is a one-day
0 comments

Is now a popular and annual sales event. No exceptions here! Dishfunctional is honoring Black Friday with special hours from 9:00am until 5:00pm (or a little later- we won't kick people out) Stop by and enjoy a whole 40% off every item in our store! This is a one-day-only sale. Don't miss out! 126 South Franklin Street, West Chester. PA 19382 (free offstreet parking) HAPPY THANKSGIVING TO ALL 🦃 #blackfridaysale #vintagefinds #discountconsignment #preownedtreasures #uniqu
0 comments

SERVING UP A GREAT DEAL! 🦃

Cut the chord on the cable

Walter brought it to the table for 131 years! 🍽

"Lenox was founded in 1889 by Walter Scott Lenox as Lenox's Ceramic Art Company in Trenton, New Jersey. At the start, it made American art pottery, and it was organized as an art studio and not as a factory. It did not produce a full range of ceramic articles but rather one-of-a-kind artwares. The company at first had just eighteen employees. Lenox's products were first displayed at the Smithsonian Institution in 1897." "Lenox tableware is at the vice president's official res
0 comments

Stop by on this beautiful Fall day and take 70% off all Halloween merchandise until its gone! 🎃 Of note, our book sale is ongoing. All books $6 per bag full (excluding audio books). 📚 Dishfunctional 126 South Franklin St, West Chester, PA Store Hours: 11am until 5pm (Tues thru Sun)
0 comments

Our doors just opened at11am, and will open again tomorrow from 11am until 5pm. People are loving our current promotion and walking away with some fabulous glassware, vases, bowls, dishes, and nice fall décor and more! Whole shopping crates for dollars and cents! Our low-priced glass, crystal and Halloween/fall merchandise is being slashed! Freddy Krueger would be proud! Stop by and... Take 60% off all Halloween/Fall items Take 60% off all clear glass & crystal Take 50% of
0 comments

50% off all glass- "60%" if it's Clear! PLUS 60% off all Halloween/Fall merchandise! We stocked our store shelves with more glass and crystal inventory. Stop by and check it out now through 10/31!! DISHFUNCTIONAL 126 South Franklin Street, West Chester, PA 19382 (free convenient parking)
0 comments

This isn't a trick, its a treat!! Stop out and cash in on the promotion while inventory lasts.. DISHFUNCTIONAL 126 S Franklin Street, West Chester, PA 19382
0 comments

Home Entertainment at a DISCOUNT! 🎼🎬💿

DishFUNctional is hosting a multi-media extravaganza! It has been a while, so we are offering bigtime savings! Spin records. Update your CD collection. Treat yourself to a narrated book. Grab a great movie... Feed your soul, flip through the pages of your mind, and travel down memory lane... with us. Check out our eclectic collection of vinyl LPs and 45's, a nice selection audio books, Music CD’s, a great selection of DVD’s, and a few VHS tapes. All great for audio and visua
0 comments

SALE DATE: Saturday 10/16/21. Doors open at 10am and close at 2pm DISHFUNCTIONAL is DBA as FurnFunctional this Saturday! We're having a FURNITURE SALE at our WAREHOUSE. Park in our free lot on Franklin and stroll down the sidewalk to the back of the building. We will be rolling up the garage doors on Barnard Street at 10am! Browse our furniture and then swing back to your car in our front parking lot to shop in our store that opens at 11am. WE HAVE A BIG SELECTION TO CH
0 comments 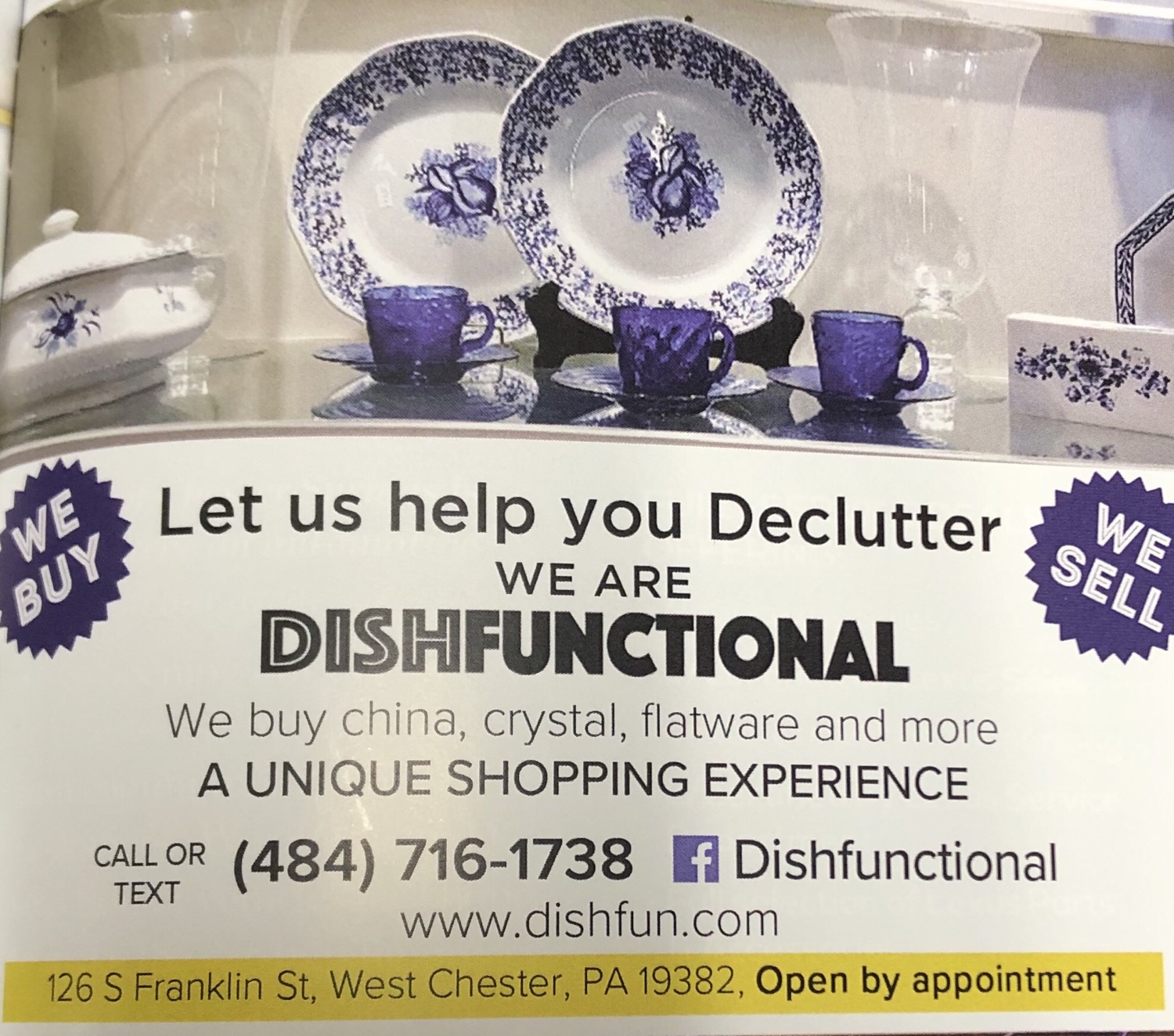 Ever heard of "Stingy Jack"?

Jack O’Lantern sounds Irish, right? How 'bout "the practice of decorating jack-o'-lanterns originated in Ireland, where large turnips and potatoes served as early canvasses. In fact, the name, jack-o'-lantern, comes from an Irish folktale about a man named Stingy Jack. Irish immigrants brought the tradition to America, home of the pumpkin, and it became an integral part of Halloween festivities..." So who was Jack? ...According to Irish myth, "a man nicknamed "Stingy Jack" i
0 comments

...ever wonder where the Halloween tradition originated? 🎃

The Salem Witch Trials happened long after Halloween traditions began... "The tradition originated with the ancient Celtic festival of Samhain, when people would light bonfires and wear costumes to ward off ghosts. In the eighth century, Pope Gregory III designated November 1 as a time to honor all saints. Soon, All Saints Day incorporated some of the traditions of Samhain"~ history.com "Samhain is a Gaelic festival marking the end of the harvest season and beginning of winte
0 comments

"Reading is a discount ticket to everywhere" —Mary Schmich

Our sale on books continues by popular demand! We are selling a full bag of books for $6 per bag. We offer pre-owned books in good condition and popular title and variety. Stop by DishFunctional and stock up and check out the rest of our store. 126 South Franklin Street, West Chester, PA 19382 (We are located just outside the heart of West Chester with free off-street parking) Tues thru Sun 11am to 5pm #discountbooks #discountshopping #funshopping #dishfunctional #westch
0 comments

Make it a double all weekend long!

Just a reminder... DishFunctional is hosting a weekend double sales event Last day to take 50% OFF all glass and crystal through closing-time today We have an enormous inventory that includes many unique items with a variety of sizes, shapes, colors and styles to choose from! We truly do. Come see for yourself. We're also practically giving reading books away! Fill a shopping bag with books and pay only $6! No limit per customer! We just added many new hardbacks and sof
0 comments

Fall into savings this Friday through Sunday! Take 50% OFF all Glassware 🍸

Sale includes all glass and crystal in the store from October 1 through the 3rd PLUS: Our buy-a-bag-of-books for $6 has been such a success, we extended it until the end of October! 📚 HOURS: 11am until 5pm LOCATION: 126 South Franklin Street West Chester, PA 19382 #glasssale #vintageclass #midcenturymodern #discountglassware #dishfunctional #westchesterpa
0 comments
1
2345